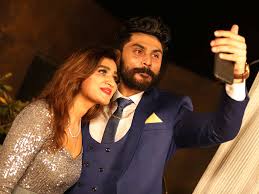 Bigg Boss is the reality show and it’s a platform for many people to make their careers in the industry. Bigg Boss Malayam 2 had been in trending on social media due to various reasons.

Recently Bigg Boss had given a task to the contestant known as ‘Bigg Boss Call Center’ where every contestant had to make a call to other contestants and should ask such questions so that the other side contestant should put down the call. Pawan loses his temper and even loses the game.

Alsandra called Pavan and tried to asked him his personal life questions. After calling him stupid. Sandra says that Pavan is totally dependent on his wife financially.

After this episode, Lavanya seems to be offended as she feels it’s very disrespectful to say such things on National Television.

“Even though it was for deed. Alsandra shouldn’t have used my name. Her comment was tragic.I think, she did this to provoke him and show him as a bad guy”, Lavanya said. Lavanya also said that she feels blessed to have a companion kike Holiness who struggles to pursue his passion.